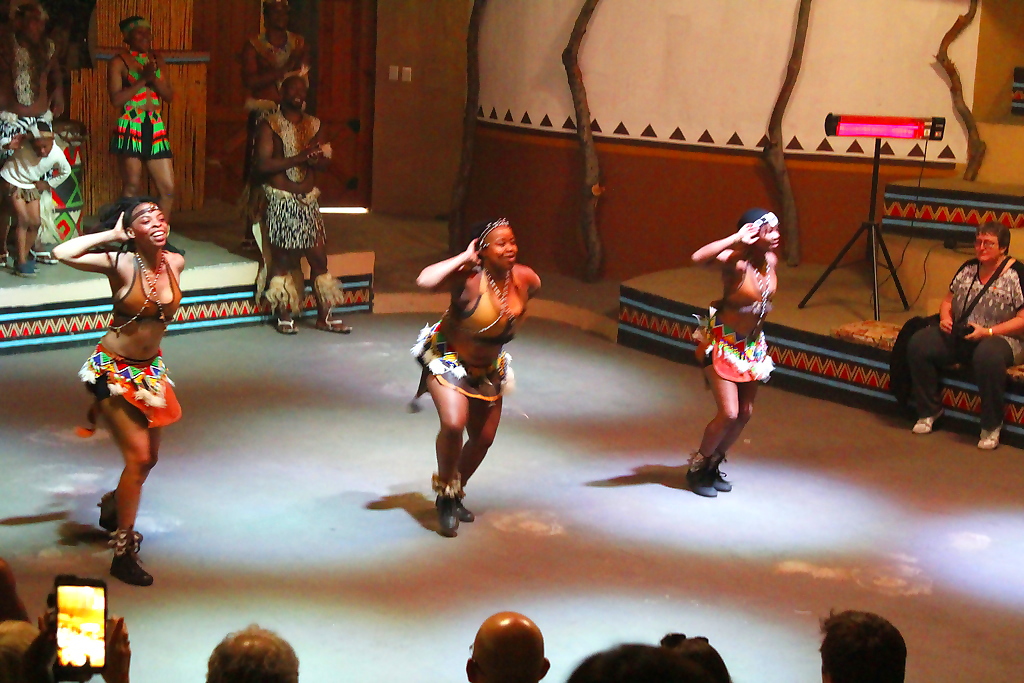 Get a taste of real black South Africa culture with Lesedi Cultural Village Half Day Tour from Johannesburg . Get to know what it means to be black as we explore the different cultural heritage that we have as Africans and why we preserve it to this day.

Lesedi Cultural Village showcases the culture of South Africa Tribes and their deep-rooted traditions. We will do a 2-hour village tour where we will get to learn about the various tribal kings.

We will also get a chance to see various tribal Villages in their traditional settings with some very deep-rooted traditional beliefs which are still being practiced today in some communities.

Finally, we will gather in our place to get a taste of real Africa traditional dances with various tribes giving us a taste of their own dances coupled with their traditional regalia which will leave us asking for more.

The Lesedi Cultural Village Tour is a half-day tour not to miss. Book your Spot today for a taste of the best South Africa has to offer in its Cultural setting at the heart of Johannesburg.

What to expect at Lesedi Cultural Village 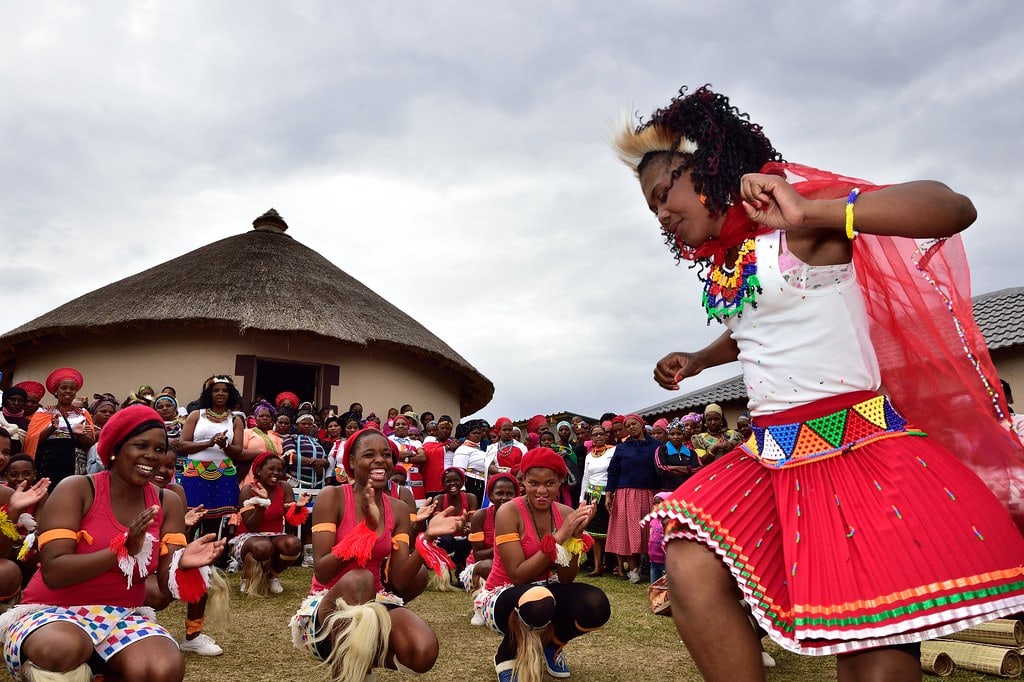 When u arrive at the Zulu Homestead you need to stand at the gate and greet by saying “Sanbonani sikhulekile ekhaya” (Hello we are greeting everyone at home) to warrior whom u will find standing near a tree.

He will then pass the message to the king that there is someone or people at the gate. The king will arrive at the gate and welcome you inside his home.

Zulu people make grass Mats that they sit on during the day, at night they use the same grass Mats to sleep on. There is an important house in the village, which is the grandmother’s house, it is important because they use the house to communicate with their ancestors, hold meetings and ceremonies. They also have a cattle kraal called “isibaya”

There is a Zulu main kitchen called ixhiba that they use to prepare their traditional food, which is a dumpling, chicken, uputhu which is usually eaten with Amasi (Raw Milk) and Umqobothi which is sorghum beer. Usually, the young ones eat in groups using a traditional tray. 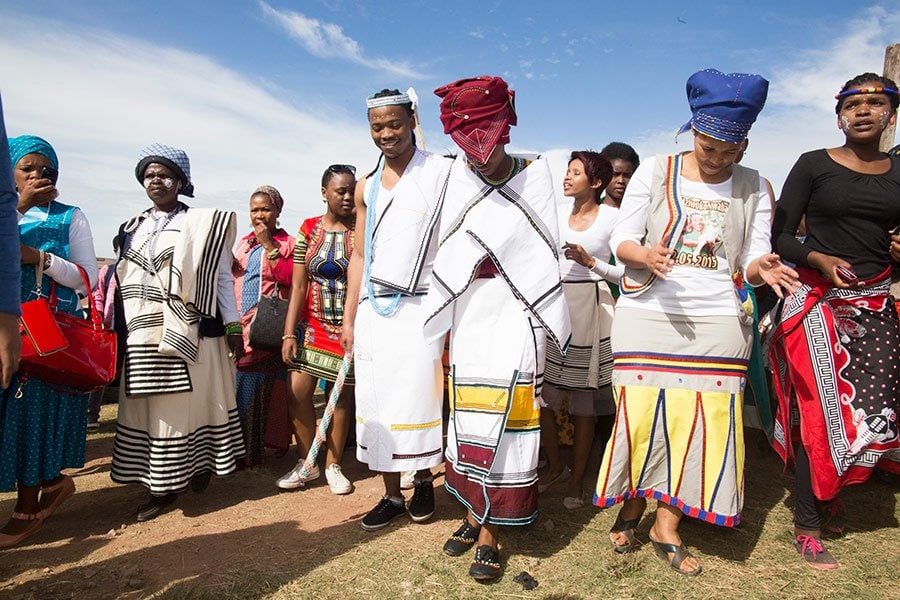 Xhosa”s greet by saying Molweni. The tribe is the second largest group in South Africa. The fireplace outside that is divided into 4 for wind purpose.

When u enter in one of their huts, the ladies sit on the right-hand side and males sit on the left hand side because it is believed that males should protect women by sitting near the door. Inside the hut, there is a fireplace. The homestead has a cattle Kraal called is isibaya

One of the huts in the Xhosa homestead is used as a kitchen they prepare umngqoshu which is a mixture of Samp and beans, bread, Maize and sorghum beer known as umqobothi.

Once married, makoti wears an “idaki” (a dress given to her by her husband’s relatives). She wears a blanket or shawl around the shoulders, her iduku, and an uxakatha (towel or thick scarf) around her waist.

The shawl represents the qualities of protection and nurturing expected of her. An inkanzana (unmarried woman with a child) must wear a longer skirt or dress below the knees at least, while an intombi (young unmarried woman) is entitled to wear shorter skirts.

A bride wears an ankle-length skirt. The covering of her legs is dual purpose. 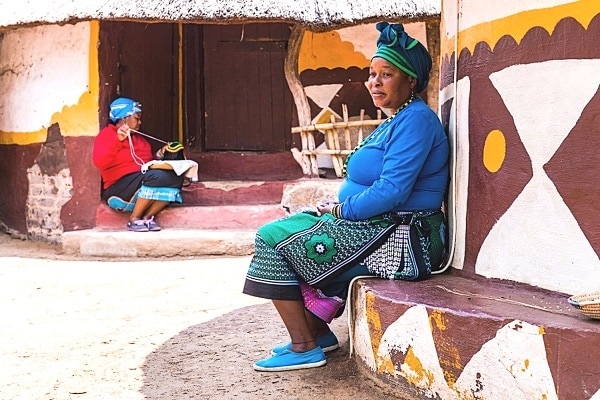 The Pedi culture greets by saying Tobela/ Le kae. The king of Pedi was Matsebe Sekhukhune (1814-1882). The Pedi tribe practices the ancestral customs.

They slaughter goats when they need to communicate with their ancestors. Kgoro is a meeting place for elders to gather around and discuss matters of the village. Married women polish the floor using cow dung 3 times a day.

Thophi is a meal that is made from maize mixed with fruit called lerotse. Morogo wa dikgopana (Spinach cooked and given a round shape and left to dry up in the sun). Dikgobe (coarsely ground corn/samp and beans) and Mopani worms.

The chief would wear clothes made out of wild animal skin such as leopard and lion to show leadership. Married women wear Mothuhlwane and her dress will be made from cow hide and is called a dintepa. 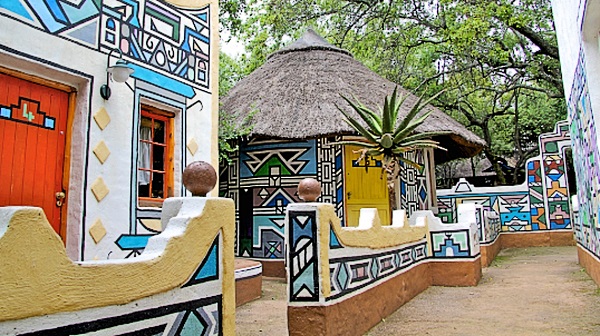 The Ndebele tribe greets by saying lotjhani. This tribe is known for decorating their homes with great designs and finger painting. The Ndebele communities practice initiation ceremonies such as male initiation and girl’s initiation procedure in which Isikhethu is enunciated through decorative beads and clothing. This takes place during puberty.

When a married Ndebele woman wears brass rings around her arms, legs, and neck this shows her faithfulness to her husband and wearing of Isigolwani which is a neck hoop made of grass-covered in beads.

A newly married Ndebele woman wears an ijogolo and Nguba which is a marriage blanket worn throughout her lifetime. 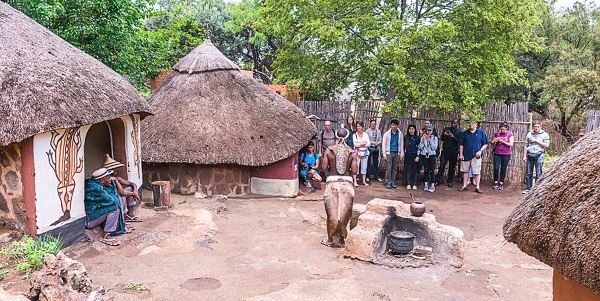 The Basotho are still known as a nation of peace, a legacy that their founder Moshoeshoe has left them, and one that will be carried down for generations to come. When arriving at the Basotho homestead you will be welcomed by the son of the chief whom u will greet by saying Kgotso Morena.

In the middle of the village, there is a fireplace that is divided into 4 sections for wind purposes. Sotho people conducted an Initiation school, which was a rite of passage. The school played the role of molding boys and girls to their adult duties and their roles in the community.

Tseha an undergarment made out of sheepskin cut in a triangular shape and tied around the body in such a way as to cover the private parts worn by young boys, but the length was increased by age. Mokorotlo a headgear that was conically shaped made out of a grass named moseha.

Basotho blanket the Basotho people had a special blanket that was made by men for the chiefs. This blanket was known as lehlosi, which was made up of skins of wild cats or a leopard. There was also some other blanket that was worn by men. They were known as setipe and mokhahla.