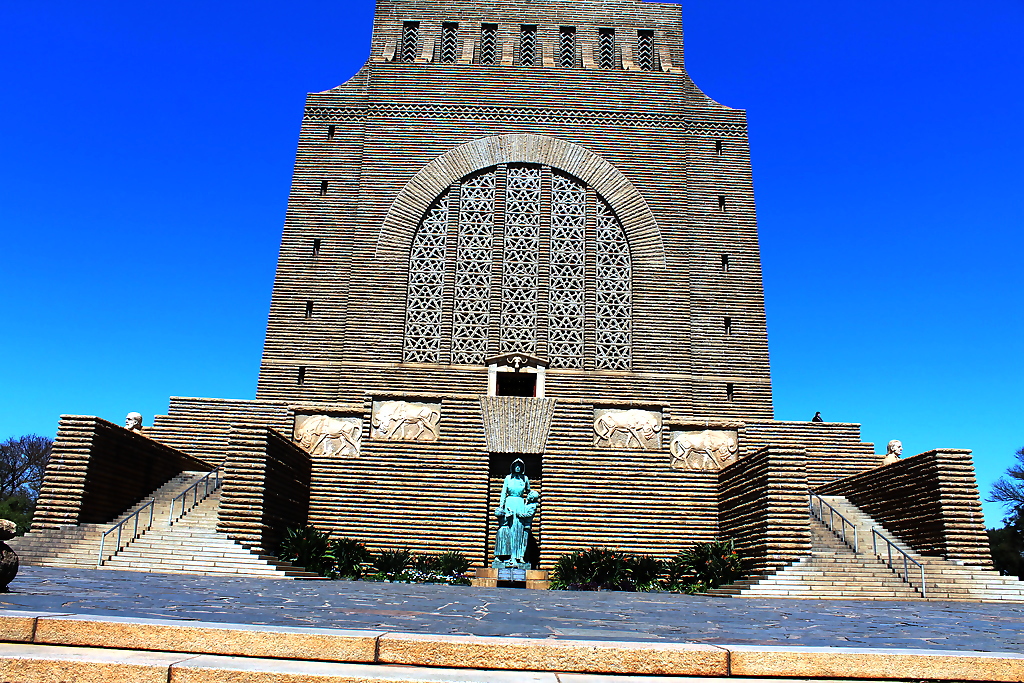 Our Half day Pretoria City Tour Will begin at the  Voortrekker Monument which is located in the northern part of Pretoria. This monument was build in 1949.

The monument gives us a deep history of the famous great trek and the significance of this great history will also be found in the monument.

Kruger Museum will be our next stop where we will learn about Paul Kruger’s house Museum and get a tour of his former house.

We will then head to Church Square where we will learn about the significance of these places which includes the Palace of Justice.

Our final Stop on these Half Day Tour will be the Union buildings for some photo opportunities and also get to know the history of these buildings.

Book our Pretoria city tour to discover the hidden history of the famous jacaranda city.

Overview of Attractions on HALF DAY PRETORIA CITY TOUR

The Voortrekker Monument Pretoria stands over 40 meters tall on its hilltop home and is visible from a large part of Pretoria. The monument was built in honor of the Voortrekkers (Pioneers) who left the Cape colony between 1835 and 1854.

Gerard Moerdijk was the architect and it was his ideal to design a monument that would stand a thousand years to describe the history and meaning of the Great Trek to its descendants.

Two elements make the site worth visiting: The Historical Frieze and The Cenotaph Hall.

These will be the first stop on our Half Day Pretoria City Tour, and we will spend about 1hr 30 Minutes on these Monument.

The last house of Paul Kruger which today is a museum displaying life during the days he stayed in this house.

The house has been refurbished to showcase the life and time during the period Kruger resided here, between 1884 and 1900 when he left for Europe in exile.

The house was built in 1884 by Charles Clark and it was designed by an architect named Tom Claridge.

Paul Kruger was State President of the South African Republic and was renowned internationally for his struggle for freedom from the British during the Second Boer War (1899 – 1902).

Both the Kruger National Park and the Kruger rand coin are named after him.

These forms our second stop on our Half Day Pretoria City Tour, and we will spend about 45 minutes here learning about the Museum and Paul Kruger Himself.

Church square started out as marketplace for farmers. Its name changed with construction of a mud-walked at center of the square.

The church burned down in 1882 and another church was constructed and eventually demolished.

Today Church Square is a flat open expense that affords clear views of the buildings that surround it. The founder of Pretoria, Marthinus Pretoria determined that the square be used as a marketplace and churchyard.

It was named for the church buildings that stood at the center of the square from 1856-1905. The square is surrounded by historical buildings.

At the centre square stands a large bronze statue of the 19th-century leader Paul Kruger dressed in a top hat and carrying a walking cane.

These will be our third stop on Half Day Pretoria City Tour and, we will get some history about these famous place.

The union building forms part of the logo for the city of Tshwane the administrative capital of South Africa. The sandstone building designed by Sir Herbert Baker was started in 1910 to commemorate South Africa’s union-status obtained in that year.

Unfortunately, you cannot go inside the buildings themselves because the Union Buildings form the official seat of the South African Government and also house the offices of the President of South Africa but visitors are free to explore the terraced gardens that look out over the city.

The gardens are popular for family picnics or to have wedding photos taken and often functions as the venue for major concerts and festivals.

The union building forms the last part of our half Day Pretoria City tour and from here we will drive inside Pretoria city to see the City Itself.