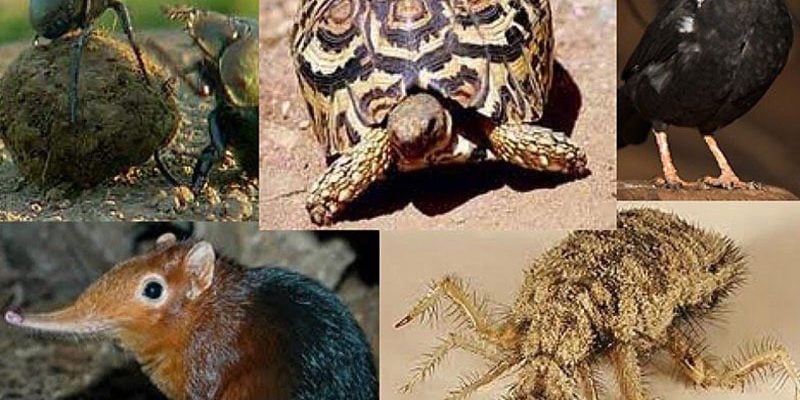 The Small 5 of Kruger National Park Safari. These tiny creatures named after their Big 5 predecessors are truly a sight to behold when looked upon.

Named after their bigger counterparts these animals include the Elephant Shrew, the Leopard Tortoise, the Ant Lion, the Rhino Beetle, and the Buffalo Weaver. The little 5 or Small 5 are nothing short of cute and non-threatening compared to their larger counterparts.

A look At The Small Five

This animal is nothing short of adorable with its mousy body and a long nose that resembles an elephant trunk a feature which contributes to its name.

Said to be measured just above 25 cm including its exceptionally long tail which is longer than its body and head combined this tiny creature is said to be extremely hard to spot but when spotted quite a sight.

This fast and agile animal can be found in areas with rocky outcrops that provide crevices for them to hide in. A cute animal waiting for you out in the wilderness of the Kruger Safari.

The Leopard tortoise gets its name from the black spots on a yellow background that resemble a leopard that can be found from their shells. No feline stalking characteristics despite its name, the Leopard tortoise is still a normal tortoise.

A gentle and slow creature that you would not have to run after or be afraid of when viewing. These majestic animals will be found when you embark on Safari into Kruger National Park.

Rhino beetles without a doubt get their name from the strength they possess even as small creatures and not to mention the Rhino like horn they have. These harmless creatures are mighty strong when fighting off each other but rather than that they are a delight in the wilderness.

These social animals’ creatures derive their name from following the mighty buffalo around.  Popular on a Kruger National Park Safari one is sure to be delighted when spotting our friends sitting on buffalo horns.